As in the baby who refuses to be born.

It was slightly amusing/slightly annoying at first.

I’ve always maintained that girls are easier then boys….

This is just further proof.

but DOES IT EVER!)

and now our tardy child.

Ok, so he’s only two days past due date, but I normally go two days or so early.  And I normally am not teased for two weeks.  And he’s been super low and ready to go.

When a couple is having a new baby,

oftentimes the husband will give his wife 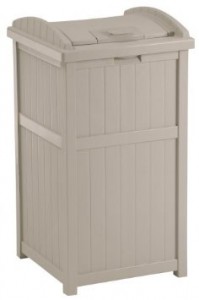 And I couldn’t be happier!

It’s not just ANY garbage can… it’s toddler proof!

As in Prairie and Thaddeus proof.

Well, and now Meadow because she’s into EVERYTHING.

While it can be pushed around, it can’t be knocked over…. at least not easily.

And it’s sturdy, so no more easily broken latches.

For the past year we have resorted to using shopping bags for the garbage.

it’s so easy to take it for granted.

Baby James seems to be pretty crowded nowadays…. gone are the power kicks … although there’s still times he manages to get one in and hit some painful ligaments. Now he’s just mostly squirming and lurching. He has his favorite position that he always moves back into, which is kind of fun as it leaves his hiney pushing out against the right side of my tummy.

Except for one scare … which was my first baby safety scare out of nine pregnancies (not bad!) the pregnancy has gone by way too fast and been uneventful. Just the usual woes that hit me. Restless legs… the nonstop maddening itchy back…. stuff like that. Fortunately most of these things disappear within a week of delivery. 🙂

The Braxton Hicks have plagued me all of this third trimester… my constant reminder of what I have to look forward to. <shudder> All of the pregnancy discomfort I can handle…. but I’m a chicken when it comes to labor.

Little Jr. has turned out to be a very accommodating baby so far! 🙂  On this day last week I was pretty convinced he would be a week early… he was so very very low and it sure felt like things were going on. He was so low that he was suddenly measuring behind and I had seemingly gotten smaller.  It would have been inconvenient timing though as there were things I really needed to do before he came…. namely the monthly grocery trip.

So, now that I’m done with the things that HAVE to be done (fully stocked pantry!) he’s free to come, although timing is still dicey.

Today would be good ….

Saturday would be bad as Gramma and Grampa are busy….

Sunday (DUE DATE!) would be terrible as that’s Meadows birthday….

Tuesday would be really terrible as our **MUST BE HERE**  midwife has treatment that day!! I do NOT want to have this baby without Donna here!

So, now it’s just a matter of waiting… and trying to finish up my insane list of goals to accomplish before baby comes. Realistically there’s only a couple of things that I MAY be able to finish given that I’m slower than molasses atm.