Can you believe it?

Miss Meadow is going to make her appearance sooooo soon!

I’m torn between ‘I can’t wait to see her’ and ‘I’m not ready for labor’.  So it’s a mixture of excited….anxious…. and sad.  The pregnancy has seemed to go by so quickly and this could very easily be my last…. that it seems a shame that it’s about to be over. To be able to carry a child is such an amazing feat and such a blessing. In the end I never feel like I was really able to just take the time to enjoy it.

The Braxton-hicks have been REALLY bad lately. Mornings start out fine but as the day moves on they come on more and more frequently. By night time it can get pretty rough and I’m having flashbacks.

Ya..now I remember how bad it can be. Thanks for the reminder.

So hopefully Meadow will cooperate and just go easy on me. The midwives showed me how low she is… VERY low…. which may explain why the Braxtons are so intense .

For the most part, the pregnancy was uneventful. Except for sheer exhaustion and leg aches the first 8 months there wasn’t too much to deal with … all other pregnancy symptoms were pretty minimal.

The past month or so has been another story…. restless leg syndrome…heartburn… insomnia…. nausea…

And now the panic of needing to get stuff done FAST.  I’ve gotten lots done in the past few months… I got the bulk of the painting done in the kids rooms. The bathroom, hall and livingroom have been painted.  All of these rooms are at the point of being weekend projects of touch up and decorating. Freezers and pantries have been cleaned and organized.  Most of our rooms … including the kitchen have been brutally dejunked.  But there’s all those last minute things like wanting more meals made and put away in the freezer …. the house to be completely spotless and organized…not to mention finish painting the entire house  and do something with the porch and while I’m at it get the rooms decorated….and gee… wouldn’t it be nice to make something for the baby….

Unfortunately once you get this far along doing even the small things become monumental (mentally AND physically) so one just has to let it go.  Intrinsically I KNOW that in the end it’s not that big of a deal.  Once Meadow is here and I’ve recovered I’ll be able to get to all the projects I’d like done.

In the meantime I have 10ish days to make the most of!

Daphne and Duel have been giving the baby hugs and kisses… Gretchen has been discussing her a lot… and Pookie has become a bit more helpful … except for at night when she still makes me bend over to say goodnight!

Prairie and Thaddeus are clueless about the whole thing and will just have to be surprised. 🙂

Here’s a nice photo of the last time Gramma and Grampa were over . 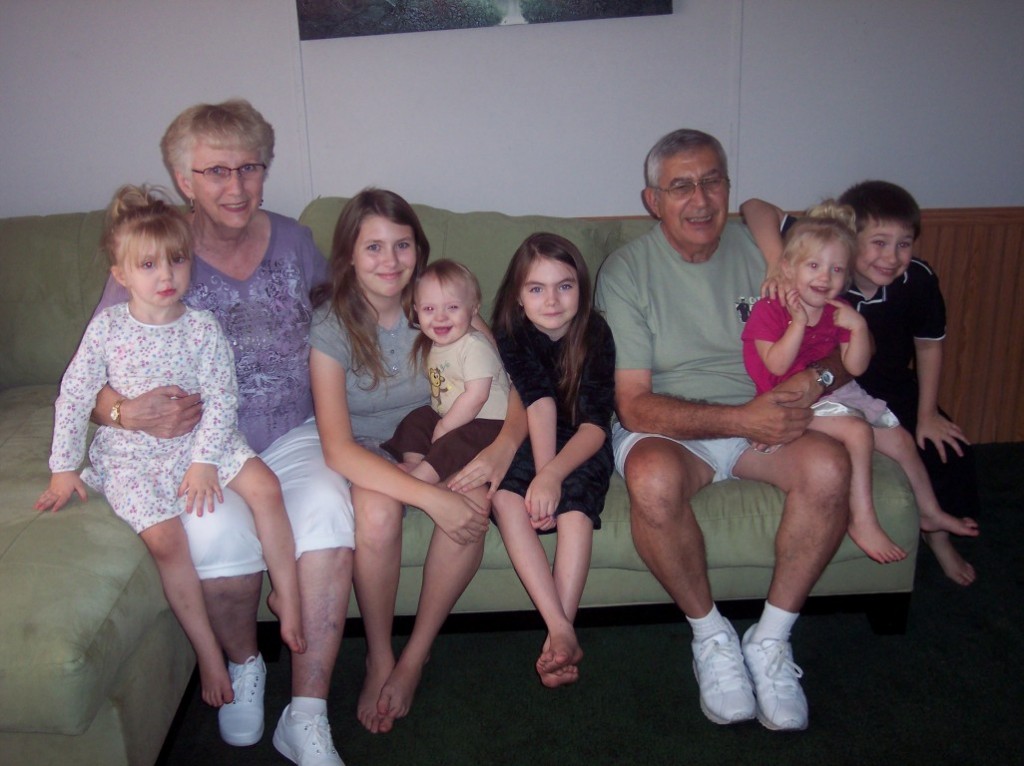 I have to keep reminding myself that we’re considered a large family….